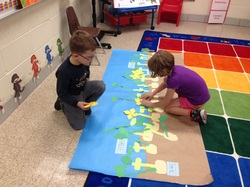 We have been learning all about pumpkins. From how they begin as a tiny seed, develop roots, and then a sprout with small leaves. Before long the tiny sprout turns into a long vine with big green leaves, then big yellow flowers bloom! Soon a tiny green pumpkin grows throughout the summer and in the fall the best part comes! Big orange pumpkins! In this photo we made our very own pumpkin patch to recreate this wonderful growth cycle! 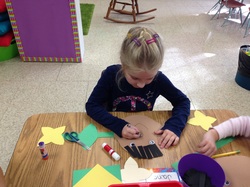 We read the funny and entertaining story of Carlos and the Squash Plant written by Jan Romero Stevens. We learned that the main character Carlos refuses to take a bath after working long hours outside tending the family farm. His parents warn him that if he does not take a bath a squash plant will grow out of his ears. Unfortunately Carlos does not heed his parents advice and finds himself with quite an earache! To creatively represent the main character and event, we made our very own Carlos with a vine and flower growing out of his ear!

To further investigate the different parts of a tree, we went outside to observe, touch, and discuss the various parts of trees. We talked about the roots, trunk, bark, branches, and leaves. We made bark and leaf rubbings using real bark and leaves. Then we constructed our own classroom tree that will change with the seasons! 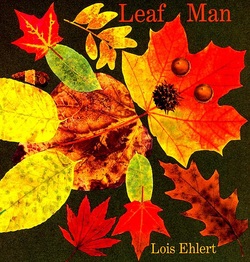 
To tie into our theme of fall and harvest, we read the story Leaf Man written by Lois Elhert. The story was about leaf man who gets blown by the crisp fall wind and travels throughout the story to create pictures of birds, cows, fruit, squirrels, and other types of designs made out of his leaves. After reading our story the Kindergarten students used the leaves that they have been collecting to create their own leaf man pictures. We had so much fun and came up with some amazing creations! 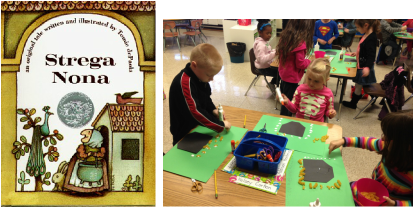 As we approached Halloween, we began to talk about witches. We read the folktale Strega Nona re-told by Tomie DePaola. The story was about a good witch who had a magic pasta pot that would cook pasta on it's own after Strega Nona said the magic words. Strega Nona's helper Big Anthony ran into some trouble after he decided to use the pot while Strega Nona was away. The pasta pot cooked so much pasta that it soon filled the whole village. When Strega Nona returned, Big Anthony had to clean up the mess by eating all the pasta! To re-tell this story, the students used construction paper to make a pot and glued dried noodles to their paper.

I'm Not Afraid of Anything!

We read The Little Old Lady Who Was Not Afraid of Anything written by Linda Williams. This was a funny story about a little old lady who is followed by a spooky scarecrow through the woods. The scarecrow follows her home and tries to scare her. The little old lady tells the scarecrow that she's not afraid of anything, but she knows some animals that might be. The scarecrow then stays in the little old lady's garden where he scares off the crows. After reading this story the students made their very own scarecrows following step by step directions!